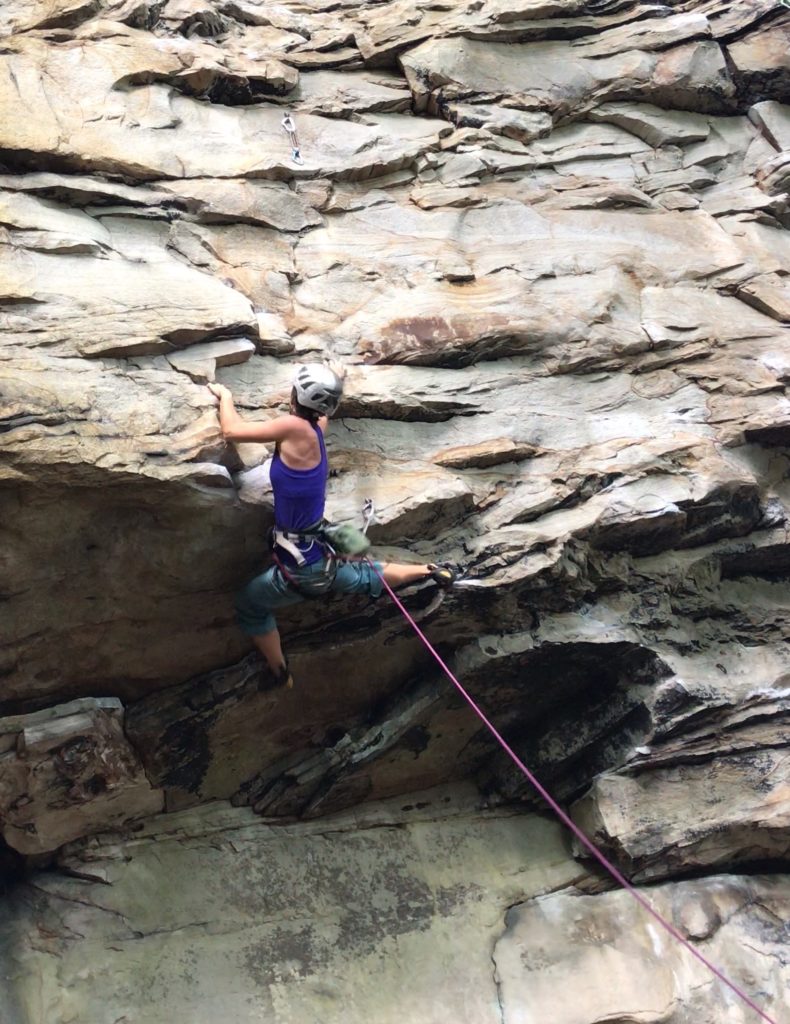 Our first fall forays at the New a couple of weeks ago actually ALMOST felt like fall.  Then this past weekend was back to summer.  Autumn is such a tease here in the Southeast.  I’m over it.  It’s hard on the psych.  And it’s hard on the skin. Considering conditions the past couple of months can be summed up by the phrases “hot,” “wet”, or “hot and wet,” CragDaddy and I both came into the NRG with low expectations.  Aside from a sweltering Labor Day weekend at the Red in Amazonian rainforest conditions, we’ve pretty much been gym rats since we got back from Ten Sleep in July. I know for me personally, it always takes me a while to get my lead head back on straight when I haven’t been climbing outdoors a lot.  But despite a somewhat inconsistent start, it seems like fall is finally getting underway.

Our first weekend out was probably the wettest I’ve ever seen the gorge, even though it wasn’t actually raining.  (Hurricane Florence is the gift that keeps on giving.)   Trails were mudslides, and trickling streams were raging waterfalls.  So a lot of our initial options were nixed due to wet conditions, but we found plenty of dry rock at Summersville.  On our first day out we managed to get in 3 pitches – Baby’s Got a Bolt Gun 10c, Strong Arming the Little Guy 10b, and Orange Oswald 10a before moving over to Long Wall once the crowds all descended.  Our afternoon was spent at Long Wall, where CragDaddy was finally able to put down Under the Milky Way 11d, a line that he’s for some reason always waited to get on until the end of the day when he’s tired. And after a very poor showing on my first attempt at Maximum Overdrive 11c, I pulled myself together and sent 2nd go without sucking too much wind.

Sunday was my turn to pick a route, and I chose Morning Dew 12a, a route that so many people say is soft for the grade but I just couldn’t pull together on point the last time I tried it a couple of years ago. It’s such a long hike that we never made it back, but a weekend without an agenda seemed like the perfect opportunity to get some closure on it. But after an hour of hiking, we rounded the corner and….it was a waterfall, the only wet line at Fern that day. Dangit. 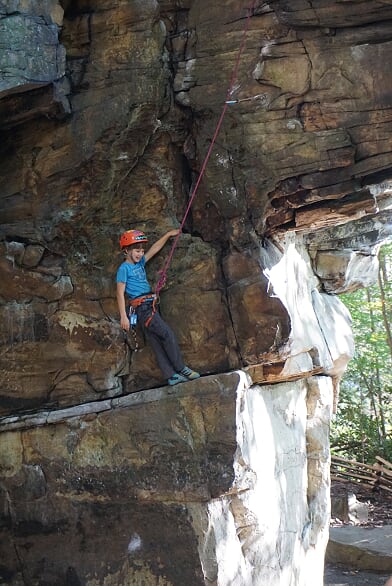 So we dropped back and punted over to a route that was a good deal harder than we’d initially wanted for a first weekend out in a while, but had been on our bucket list for a long time – Thieves in the Temple. It gets 12b in the guidebook…but has a reputation as the hardest, most sandbagged 12b in the gorge.  Without a warm-up other than an hour and a half of hiking, CragDaddy hopped on it, with stick-clip at the ready. I’ll spare you the details, but we both got annihilated on our first attempts. It’s 90 feet of nonstop V4 climbing, with a V5ish crux on the upper face.  The movement is varied and super technical, with a little bit of everything. Burly start, crimps, long reach off a mantle, big deadpoint that goes straight into a pumpy, scary traverse…then the crux starts on the face, and doesn’t really let up til the chains.  Despite the struggle, I was able to do all the moves on my first go, and on my second go gave a valiant effort linking the first 5 bolts before petering out and hanging on all the remaining bolts. The thought of actually putting it all together was pretty overwhelming, but it felt like the kinda thing that might be doable later on in the season after some more power endurance training.

Psych was high coming home from that trip, and after a couple of really good training days at the gym during the week, we found ourselves back at the New again, this time starting out at Butcher’s Branch.  The only bad part about Butcher’s Branch this time of year is the crowds.  Lucky for us, at this point we’ve done all the popular routes.  So after getting down there early to put up Flight of the Gumby 5.9 for Big C, we were able to relax and take our time the rest of the day because no one wanted a piece of Bourbon Sauce 11d.  I’ve been climbing there for over 10 years and I literally don’t think I’ve ever seen anyone on it.

I just assumed it must not be that great of a route, but I was pleasantly surprised!  It’s every bit as good as the other hard 11’s on the wall.  It shares a start with Control 12a (another good line that no one ever does!), then traverses left for a burly roof pull.  The climbing eases up until you reach another roof, where a final (and super fun!) boulder problem awaits before the chains.  My first go I struggled down low but found the upper crux flowed really well for me.  I was not confident tying in second go, but I managed to send.  It wasn’t a sure thing – I almost fell at least 3x pulling over the initial roof, and on the first move of the upper crux my feet went flying off unexpectedly.  While the grade alone might not be that impressive, I’m pretty psyched about it – if you wanted to set a route that exposed my specific weaknesses, it would probably look a lot like Bourbon Sauce, so I was pumped! (Both literally and figuratively ;)). 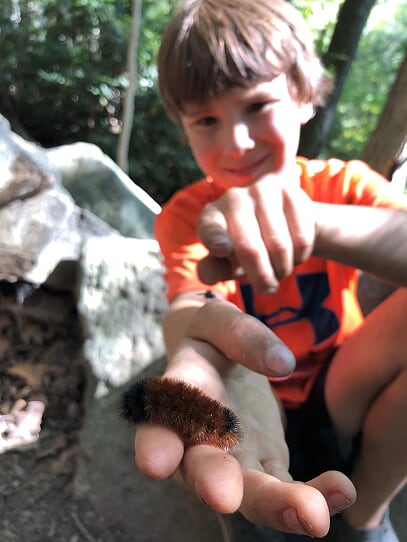 The fall critters are here…but where are the fall temps?!?

After a confidence boosting start to the weekend, it was back to Fern for another duel with Thieves in the Temple.  I linked the same 5 bolts again, but then fell in the same spot again.  The traverse went a little better, but my left hand kept sliding off the crux crimp, and eventually I had to just pull through.  I did find better beta for the last couple of moves though, and the finish felt the best it’s ever felt.  Physically, I’d say the battle ended in a stalemate.  Mentally…my psych level for getting on this route again is potentially lower now.  That thing is going to be a monster to link, and it’s not worth trying again until the temps are no longer 85 with 100% humidity. #whereareyoufall

Also worth noting is that I (still) can’t do the move on Fly Girls, and that Quickie in the Molar would’ve been an okay route minus the weird traverse, bad bolts, and chossy rock up high.  Sometimes the obscure routes are worth doing, sometimes not…

That said, I’d say our season as a whole is getting off to an unexpectedly decent start.  The only extreme lack of success so far as been in the photography department…our first weekend we didn’t get a SINGLE shot that had anything to do with actual climbing.  This past weekend we were only slightly better.  Sorry about that. We’ll try to get our photo game going, hopefully happy sooner rather than later, as the weather seems like it finally wants to shift in the right direction.  (Fingers crossed.)