Were you aware of that?  You probably were.  For some reason, I’d forgotten.  Maybe because it’s been so long since I’ve touched rock as dry and crisp as it was this past Saturday.  Or maybe because I’d never experienced such a direct one to one comparison before on such a hard route.  But before I get ahead of myself, let’s rewind it back a few months to where this story actually begins.

I initially got on Death by Chocolate partly because it looked kinda cool and mostly because it was the only thing dry over Memorial Day.  Then, as usual with a good rock climb, I got sucked in.  I worked it hard right up until a few days before we left for Ten Sleep, before finally conceding to the summer heat.  At that time I would have told you the powerful crux sequence contained the hardest moves I’d ever successfully been able to do on a rope.  My wingspan wasn’t long enough to do the crux the most obvious way, and the only beta that worked for me involved using a bad sloping pinch in combo with a desperate toe hook to fight a seemingly hopeless barn door at full extension. 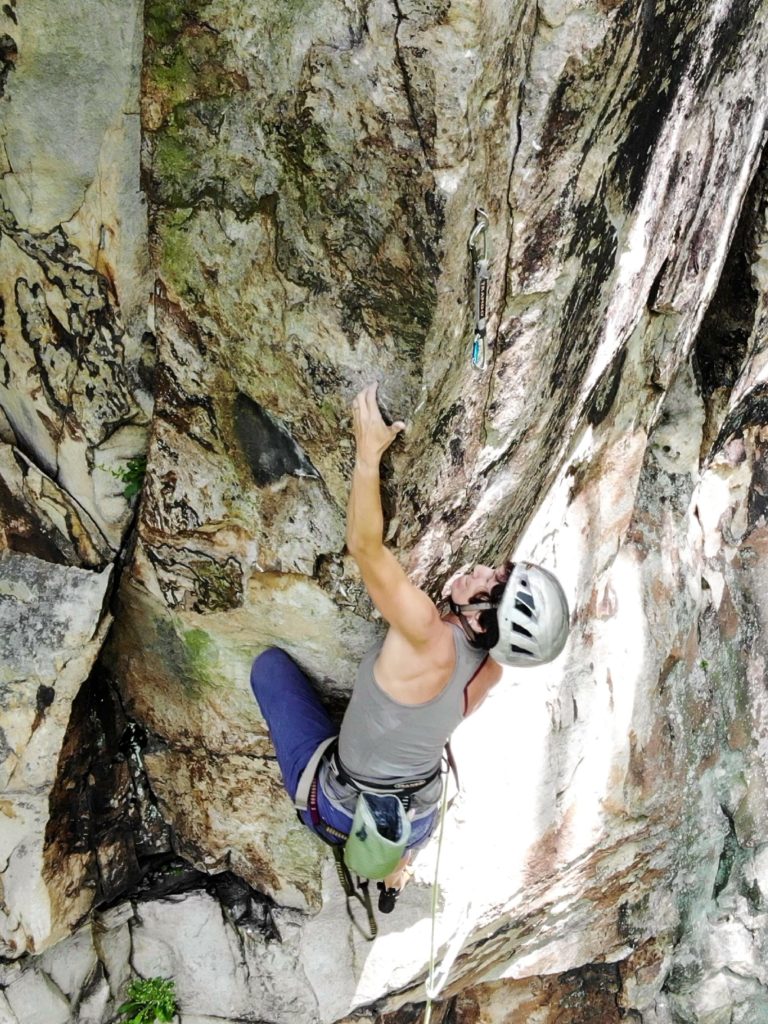 I had every other move on lock down – technical crimps down low, check.  Exciting and insecure finish, check.  But after 6 days and 20+ tries on it, I just couldn’t keep the barn door closed mid-crux when I was on point.  My success rate on those moves was probably around 20%.  Not great odds, especially for a route featuring such skin-shredding holds.

I had several reasons for wanting to get ‘er done before Ten Sleep.  Obviously, it would have been a great confidence boost going into my trip.  And sending “now rather than later” meant coming into fall with no loose ends to tie up.  But mostly, it was because I knew if I waited til fall came around, I wouldn’t care about it as much.  It is, after all, just a piece of rock, and I knew once a couple of months went by, I wouldn’t feel nearly as intensely about it as I did then.  My motivation level is very emotion-based, and I had a feeling that if I didn’t tick it then, I wouldn’t want to summon all the effort to work it again another time, and would instead opt to move on to other stuff.  Especially since CragDaddy had already sent, and we really enjoy working on projects together.  So when it didn’t go down, I chalked it up to just being the one that got away.

But somehow in the 4 days between the events in this post and the event’s of my last post, climbing conditions had gone from summer to winter.  We literally went from tanks and shorts straight into puffy jackets.  The previous week’s high was 85…and this past weekend I’m not sure it ever got above 45.

Due to the potential rain that was forecasted in conjunction with the low temps, we opted for Hidden Valley over the New.  And since I didn’t have anything else “in the hopper” so to speak at Hidden Valley, I’d told myself that if I felt good, I would give Death by Chocolate another whirl just for kicks.  Then if it still didn’t feel any closer, I could move on and forget about it for a while.  Now while I’ve always been a big proponent of the “sun’s out, gun’s out” rule, I am NOT a fan of cold and dreary, which is how our first few hours of climbing began.  My toes got so cold on the warm-up I thought about declaring myself done for the day.  But climb number 2 required a little more effort, which heated my body up just enough that I could take note of how absolutely perfect the rock felt.

Ah, there was that amazing friction that by this point has pretty much achieved unicorn status in the South.  Just like that, project time was here!  As we hiked over to the Chocolate Wall, clouds gave way to sun, and our whole crew just soaked up what it felt like to be rock climbers in October. 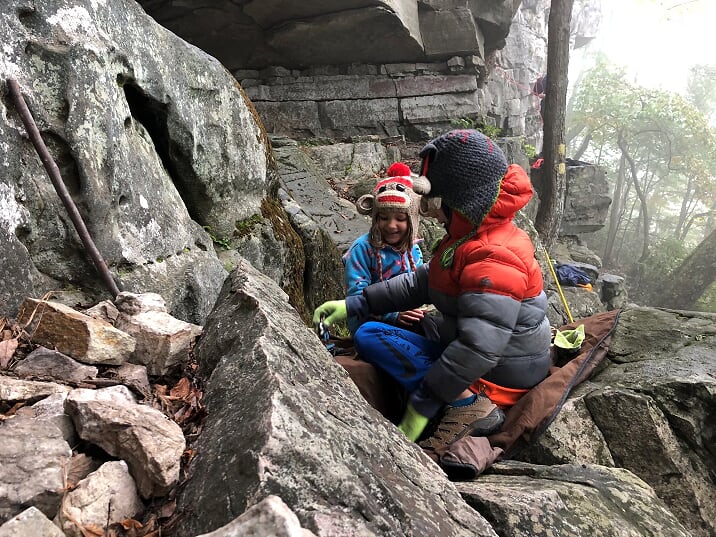 Kiddos having fun in lots of layers

“Here we are again!” said my son cheerfully as he and his sister threw their packs down and went off in search of acorn caps, mushrooms, and cool leaves to make a fairy house over on the rocks at the base.  The line looked as intimidating as ever, and a big part of me just wanted to walk away.  I thought back to one of my favorite lines from The Dawn Wall, which I’d seen just a few days prior, when Kevin Jorgeson was in the midst of struggling with Pitch 15 after Tommy Caldwell had already sent.  “Everything was perfect, and I still couldn’t do it,” he had said authentically at what seemed like his lowest point on the wall.  I laughed to myself as I thought I would probably be saying the same thing at the end of the day.  But we were all there so I at least had to try, right?  (I mean, it worked out pretty well for Kevin in the end too, so why not?!?)

Of course all of my tick marks were gone, so my first run up felt decidedly unsmooth as I struggled to find all the holds in the filtered sunshine and remember all the beta.  But when I got to the crux and made the big move to the sloping pinch, my hand stuck exactly where I put it, instead of sliding into place.  I was so surprised that I fell.  I pulled back on, ticked and brushed all the crux holds, and got back on.  The moves felt more doable than they ever had.  The finish, which had seemed so scary and “it won’t be over til I clip chains,” felt straightforward and I daresay almost casual.  Who had swapped out all these holds?!? 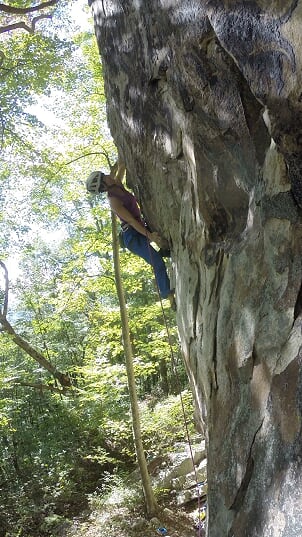 Letting go of this right hand to catch a micro-crimp before opening up is the crux.

I lowered, letting a slight amount of optimism creep in, but not too much.  But when it was my turn again, lo and behold, I sent!  It was weird – no desperation, no try hard sounds, no exciting, go for it moments.  I just did the same beta I’d been doing all along, and this time it worked.  In that moment, everything came together in a completely anti-climactic way, as if the route was actually 5.10.

It went down so easily I almost feel guilty claiming the grade.  Why on earth couldn’t I make that move last June?  Yet had I sent 3 months ago, I would have without a doubt said that for me personally, the crux on this route was substantially harder than anything I’d done before, despite being a slightly lower grade than my highest redpoint.

While I suppose it’s possible that my power has improved some since my previous bouts with this route, I don’t think that can account for how drastically different the route felt this time around – I think it’s pretty obvious that conditions were the real star of the show here.  I’d always known that cold temps = sending time…but I don’t think I’d ever realized just how much of a difference it makes.  I guess because I generally don’t start trying anything hard until the weather is already pretty good, so I’ve never gotten a true comparison on something close to my limit.  Who wants to hop on a project when it’s hot outside?  Not me.

So that said…is it 12d?!?  Looking just at Sunday’s performance, I’d say no way.  But looking at the sum total of work I’ve put into it, I’d say that it very well could be, and I managed to show up at just the right place and right time to pull it off.  Either way is good with me, I’m just happy I finally did it!  Cheers to hopefully more sending weather in the coming weeks!  Oh yeah, and if you’d like to check out the video, click here!