What do you do when climbing season goes straight from summer to winter?  Give up on the New River Gorge and follow the sun!  After yet another forecast of cold drizzle in Fayetteville, WV a couple of weekends ago, I got the green light from CragDaddy to make my own climbing plans.  A lot going on for him at work plus a minor knee injury meant his motivation was pretty low.  To take full advantage of flying solo, I decided to put out some feelers to see if anyone would be up for joining me at an area that is impossible to take the kids to – Hanging Chain at Rumbling Bald.  The hike is long, with the last half being a steep bushwhack straight up the side of the mountain, and the base is rocky with no good kid-hangout spots.  There are plenty of rocks and slabs to scramble around on, with fall potentials that ricochet back and forth down the gully and into the valley.  Needless to say, not the most kid-friendly combo. 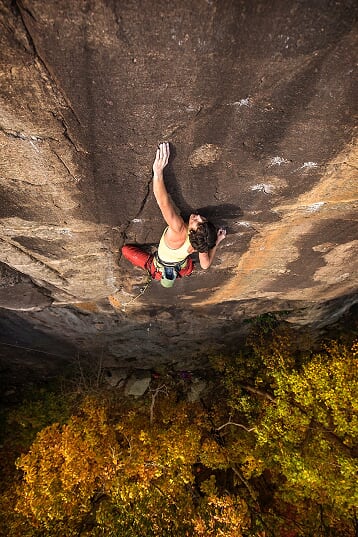 So anyway, I actually got multiple takers, one for each day.  Our objective was Spry Look, an old Porter Jarrard sandbag that would see far more action if it wasn’t guarded by such an obnoxious approach to a south-facing crag that is only climbable during the winter (and subsequently the shortest amount of daylight.)  The Day 1 strategy was for a dawn patrol start, so we could be at the parking lot right when it opened.  Amazingly enough, we torched the hike in just under an hour.  However, all minutes saved on the hike were made up for with me hanging draws…it wasn’t pretty.

The first 40 feet is sort of an approach pitch to the real action – easy (5.7?) and protected by gear and a bolt.  The only crux of this opening bit is treading lightly around a giant hollow flake.  After the bolt you will arrive at a pedestal on which you can stand and place a bomber cam under a bulge.  Pulling the bulge will bring you to a stance at the base of a seam leading into a sea of endless bolts to the top of the cliff.

Here’s where the fun begins.  The rest of the climbing feels like a giant V3 (perhaps sprinkled with a side of V4?) boulder problem that goes on for 9 bolts.  Nothing really that hard, but also nothing really that easy.  If you like crimps, none of the holds are terrible…but none of them are particularly helpful for slowing the rapidly increasing pump clock.  Also a spicy finish that is more than runout enough to make you want to hesitate, which you can’t afford to do if you’re redlining.

The first section climbs a technical seam that is easy to do inefficiently enough that you’ll regret it later.  Upon exiting the seam, you are rewarded with a good crimp rail…but no feet.  Some high-stepping through a sea of half pad crimps will bring you to a large, but slightly sloping flat hold (from now on referred to as “Biggie Flatz”).  From there, most of the holds are at least a full pad, but the moves between them get long, and the final move involves a pretty committing pop to a good knob that is always further back than I’m expecting it to be. 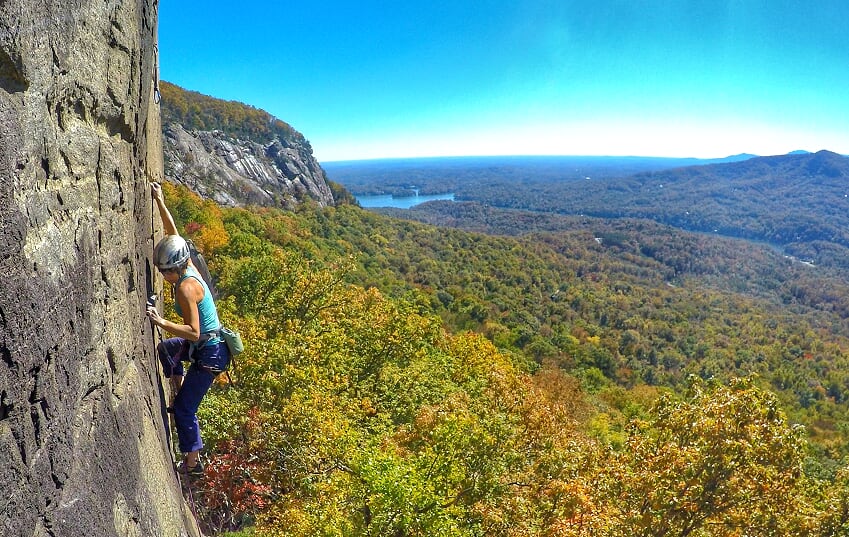 After grabbing lots of quick draws and battling beastly rope drag (please sling the cam at the roof longer than you want to!!!) I finally made it to the top.  My next go went decidedly better.  I made it through the 4 bolts in the seam feeling pretty good…but then I hit the section with bad feet and all the gas ran out of my tank.  I then proceeded to go bolt to bolt the rest of the way up.  When my turn to climb came around again, I was still so exhausted and my tips were so raw that I opted to toprope, in case I needed to pull through any of the sections to get to the top.  By the end of Day 1 I was certain I wanted to send this rock climb, but had no idea if I had anywhere close to the fitness required to do it any time soon.

If I’m being completely honest, my psych wasn’t exactly high going into Day 2.  I felt wrecked after Day 1, and was not looking forward to enduring that hike again.  But Day 2 proved to be extremely profitable.  I didn’t send, but perhaps a send was closer than I originally thought.  I’d increased my previous high point by almost 2 bolts, linked the last couple of bolts, AND found better crux beta.  We managed to get down the most dangerous parts of the gully before night fell and we had to don our headlamps, and only got lost once (thanks to Paschal and Howie for redirecting us!) 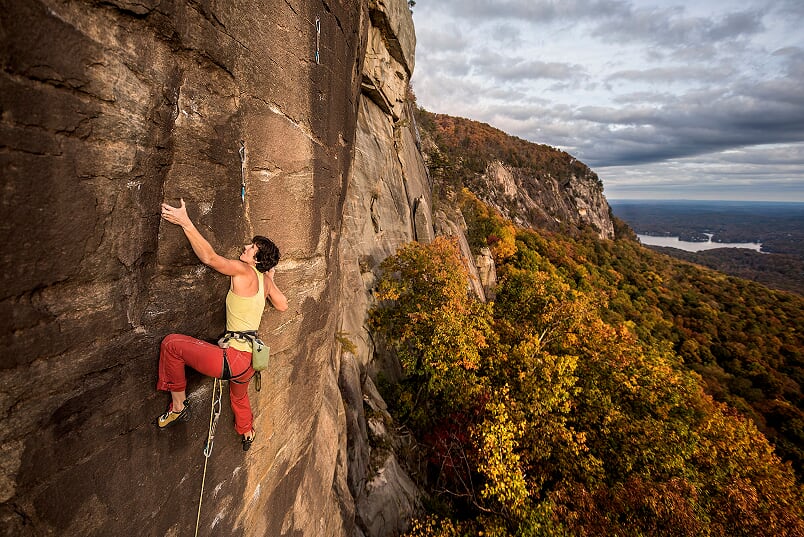 I spent all of the next week stalking the weather forecasts.  When it became obvious that most of Saturday at the NRG would be below freezing, once again my gracious hubby suggested I get back out to the Bald.  I hiked in on Saturday knowing that this would pretty much have to be the day, as I knew once the holiday craziness set in it would be difficult to 1) keep my fitness up, while 2) finding a good weather window that coincided with being able to climb sans kids.

My warm-up run on Day 3 was less than awe-inspiring.  For the first time ever I fell in the awkward bit just after the first bolt, more awkward now than before due to the fact that we had trundled an extremely loose basketball sized jug off the week before.  I then proceeded to fall after the seam, just like I usually do.  I hung on most the bolts after that, but once I clipped the chains, I lowered to bolt 7 and went from Biggie Flatz all the way to the top.  Granted that part was just on TR, but it felt good to link all that together, as well as get a glimpse of what the runout at the finish would feel like carrying some pump with me. 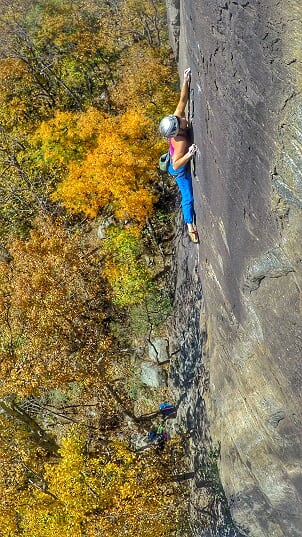 At this point, I knew I had a chance, but it would come down to pump management.  Due to the lack of good rest stances, I would have to execute every piece of beta correctly and without hesitation.  So on my 2nd attempt of the day, I climbed as quickly as I could through the seam, then got one shake out of each hand as I shuffled through the bad feet section.  That was enough to get me through the place I usually fell at, and I was able to get another shake per hand by squatting low at the next clipping hold, right before the crux.  My newfound crux beta went according to plan, and as I was grabbing another couple of shakes (and trying to control my Elvis leg) at Biggie Flatz, I suddenly realized I was getting more back than I’d expected.  I wasn’t sure I could make it to the top, but I told myself I could at least make it to the next bolt.  Then at the next bolt I told myself the same thing.  At the bolt after that, I realized that I only had one more bolt left to clip before the finish.  The only choice now was to just keep rolling, so after a couple of deep breaths and a “watch me” to my belayer, I took off for the chains…and sent!  Woohoo!

Some routes are all about “try hard”, whereas others are more about “try smart.”  What makes Spry Look such a monster is that it requires a good dose of both – figuring out the most efficient beta, so that you can use your “try hard” sparingly enough to last you all the way to the chains.  (Side note: I love this topic, more on trying hard AND smart in the archives here.)

So what’s the grade?  Hard to say, because while there may not be any individual sequences harder than 11+/12-, putting them all together felt a heck of a lot harder than 12b to me.  And really, who cares, because it’s freakin’ awesome!  Here’s my thoughts.  If you climb hard 11’s…you should get on this route.  You may surprise yourself, because there are no stopper moves on it!  If you climb 5.12..for sure this is a worthy opponent, and it’s a great route for fitness training.  And if you wanna onsight?  Better bring your 5.13 game, because there’s nowhere to hide from that pump!

Many thanks to Bryan Miller and Jaron Moss for all the photos…such an awesome souvenir to have from this epic adventure!