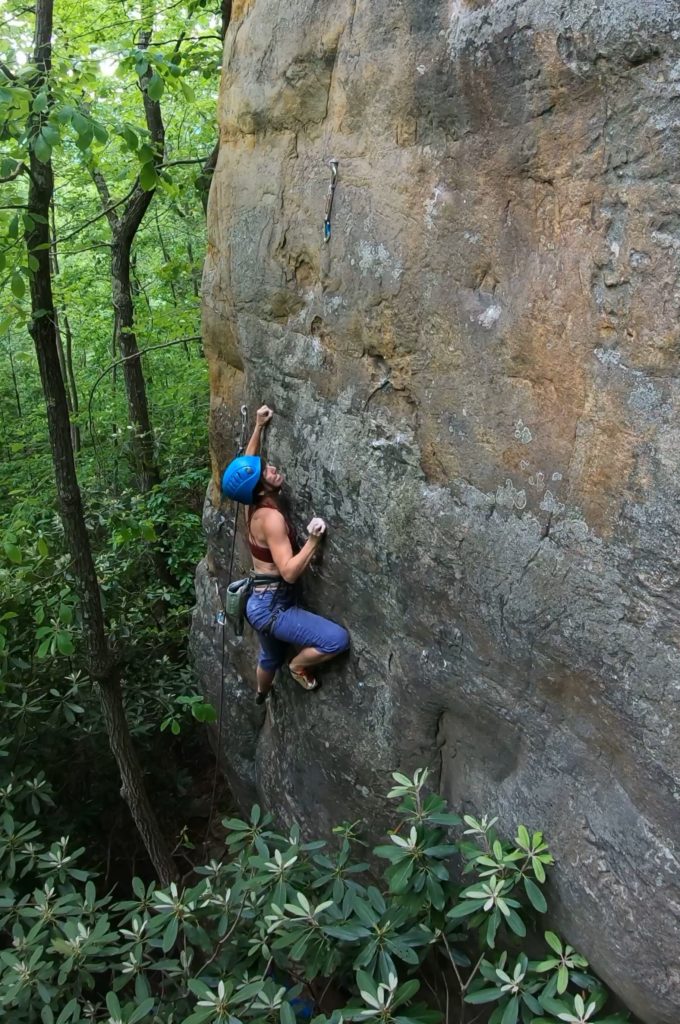 When I wrote a re-cap of my spring climbing season 2 weeks ago, it was 95 degrees, and jungle status humidity.  Today feels similar.  But this past Saturday brought a rare respite from both heat and humidity.  And I don’t mean an “it was a few degrees cooler” kinda thing.  I’m talking, lows in the 50’s, high’s in the 70’s, and 30-40% humidity.  Such a shocking departure from the norm that it seemed almost providential that CragDaddy and I rearrange our schedules to be back at the New on Saturday – because by Sunday it was going to be summer again!

That said, all the hectic-ness of Friday afternoon was well worth it on Saturday night when we drove back with a pair of sends in our pocket.  After a quick warm-up on Workman’s Comp 10d that morning, we went straight to the project, Bosnian Vacation 12d.  The one that I came up juuuust short on at the exit move of the crux a few weeks ago…and then thankfully stopped juuuust short of hitting the tree.  Although we initially got on it a few weeks ago because it was literally the only dry route we could find, we stuck with it because it’s actually pretty awesome.

Mark Paulson sums it up pretty well on Mountain Project – “Bosnian Vacation is a smorgasbord of NRG features and styles, cramming just about every New River trope into a seemingly compact 90′.  A V4 power problem right off the deck?  Check.  An immediate transition to a laughably thin technical crux on the tiniest of crimps? Check.  A huge horizontal where you can get it all back?  A requisite section of choss? Reachy 5.11 jug hauling? Crazy, exposed dihedral moves? A looong easy romp to the chains that protects well with anything from a blue to orange TCU?  Multiple checks.  Not a classic, but undeniably fun.” 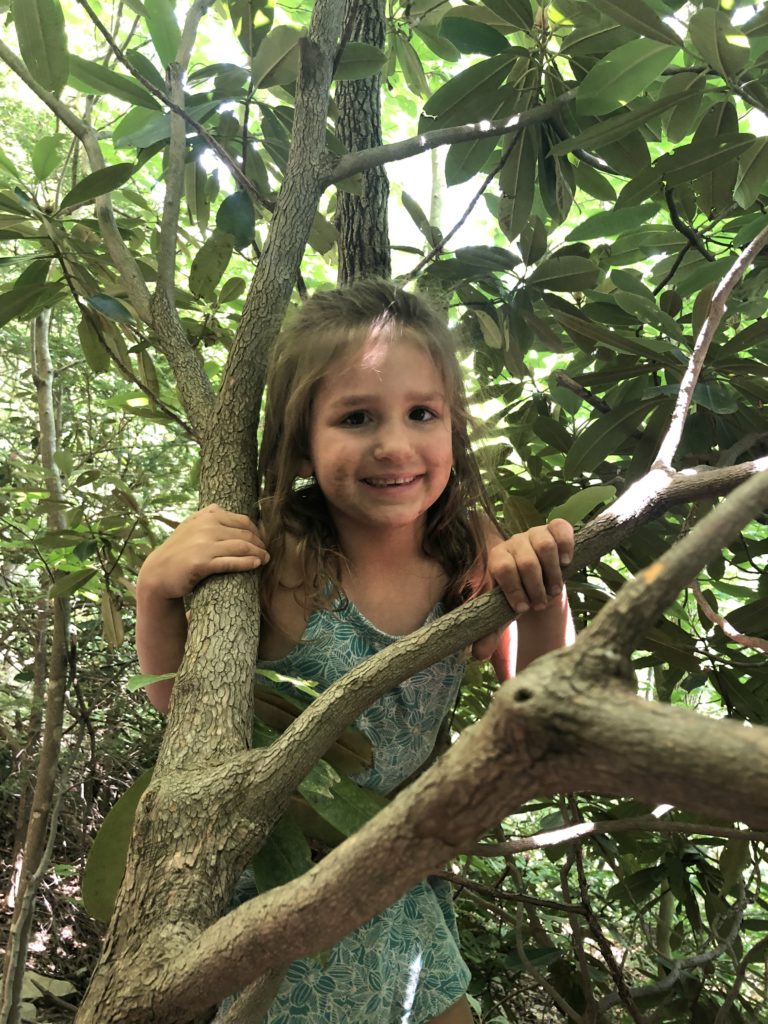 This cutie got to be an only child for the weekend!

Worth noting is that a VERY key part of my crux beta involved a hollow pinch that doesn’t seem long for this world.  CragDaddy felt pretty sure he would rip it off if he used it, and he was able to avoid it entirely, but with my (lack of) reach, not using it was not an option for me.  In fact, I used it multiple times – first as a right hand undercling as I’m stepping my feet through, then as a left hand undercling intermediate to help me stretch to a right hand sidepull.  So if you get on this route and find you need to use this hold, tread lightly!

Also worth noting is that the exit move out of the crux is a little scary, as implied earlier.  My beta involves cranking off a so-extended-my-shoulder-isn’t-engaged left hand sloping dish and a terrible right foot smear to a hero jug flake for my right hand.  Twice a few weeks ago that right foot slipped, swinging me closer than I wanted to be to a good-sized tree.  With an aware climber and heads up belayer, it’s probably fine – just don’t jump “out!”  The good news is that better conditions meant better friction, which meant significantly better contact strength on that sloping dish, and on Saturday I was able to stay a lot tighter to the wall for that committing move.  (FYI CragDaddy’s taller beta enabled him to get to the good flake before having to smear on the bad foot, so by the time he got into “pendulum territory,” the moves weren’t as committing.  Your mileage may vary, so just be aware!) 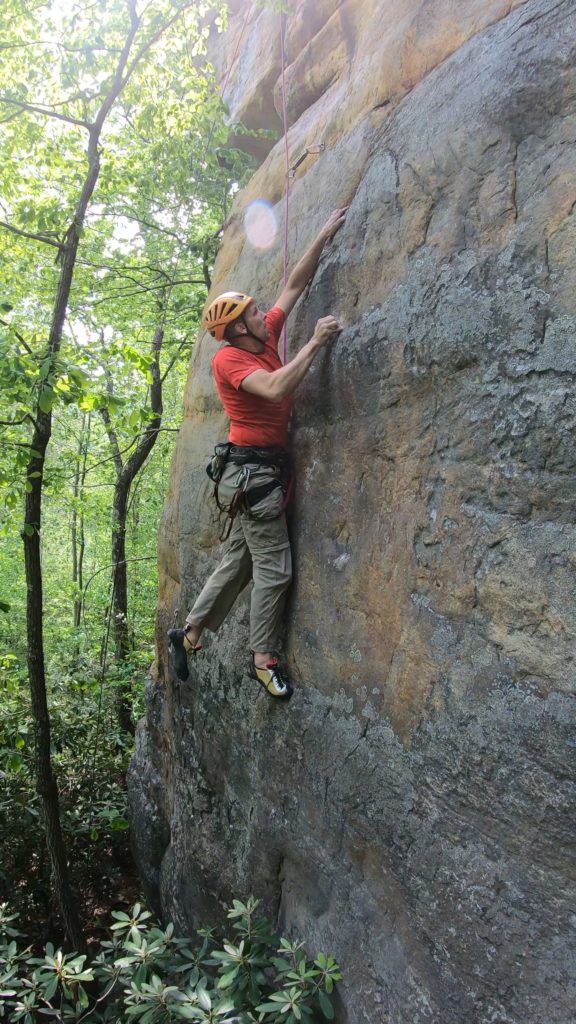 CragDaddy exiting the crux on a TR burn a few weeks ago.

After the crux is a big ledge traverse – endure the slightly awkward feet and the reward is a rest where you can get it all back before tackling the 5.11 face.  The face is slightly overhanging – the moves are big, but so are the holds!  Once you reach the 60 ft mark or so, the route rolls over into a wildly exposed dihedral (but first a no hands rest with a great view of the river!)  The dihedral to the top is probably no harder than 10-.  You’ll probably want some gear though – a blue Trango flex cam/.3 BD is easy to place from a pedestal under the final roof.  Make sure you sling it long.  Even with the gear you’ll probably want to avoid falling while pulling the roof.

After hanging the draws and rehearsing some of the harder moves multiple times, I was feeling great about every move but the last deadpoint on the 5.11 face – it’s a big windmill move for me, and though I don’t think I’ve ever fallen on it, it always feels desperate and lower percentage than I want it to be.  After his run, CragDaddy was feeling great about all but the very first move off the ground – which he had yet to be able to do even once.

But after a quick lunch break and some snuggle time with the little one (the big one was away at church camp this weekend!), we both pulled the rope and sent!  Not without some excitement though – I was blinded by the sun starting up the face, and my foot almost popped while heading to the final no hands rest.  CragDaddy probably tried the starting move an additional 30+ times…then finally made it and just kept right on going up for the send (also amidst an almost fall mid-crux and a bout of sun blindness towards the top.)  The moral of his story is to never stop fighting – he only ever made that move once, but when he did he made it count! 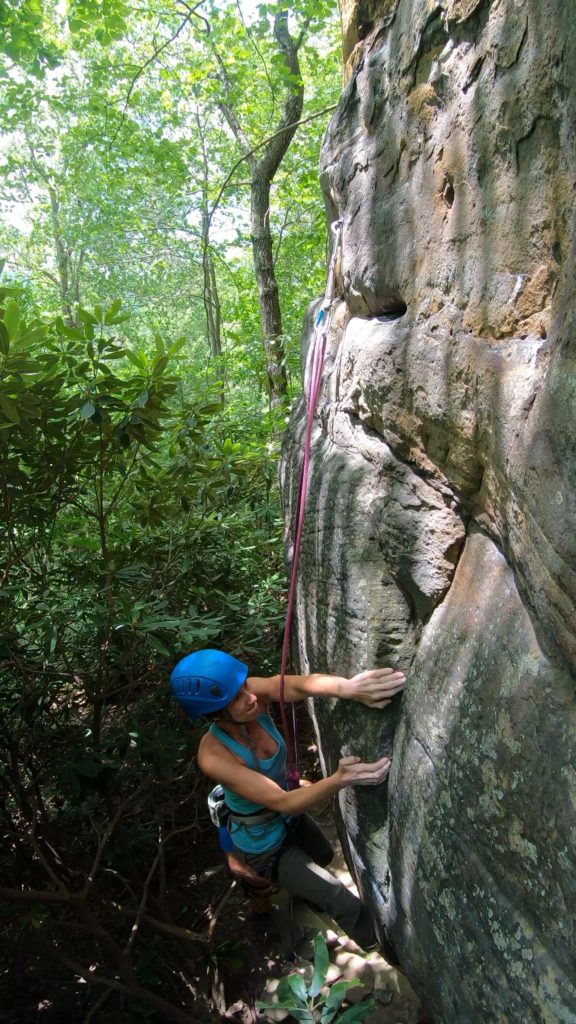 Afterwards we still had some time left in our day, so I figured I’d give Just Send It 13b a try – we were there, the route was there, and multiple people had recommended it to me as a potential longer term project.  Maybe it was the previously exhausted forearms talking, but that thing is hard as nails!  I wasn’t expecting to be able to do all the moves after just one lap of course…but I thought I would at least be able to visualize the harder sequences!  I did fine until the double dihedral, when confusion and disorientation set in for a few bolts.  I’m not going to write it off for good, but I’m not itching to get back any time soon.  (Also all praise to the mighty Trango Beta Stick for getting me to the top!)

And now I think I can FINALLY say “That’s a wrap!” on spring climbing.  Wanna know a secret?  I’m getting an SUP for my birthday (which is in August but we’re getting it early so we can use it all summer!)  So be on the lookout for some upcoming paddling posts!