A little over a month ago, I wrote a “here’s where things stand midway through spring” post.  After enduring 90 degree temps in Kentucky over Memorial Day weekend, I’d say it’s time to officially close out the chapter on Spring 2019.  Despite being riddled with rain seemingly weekend after weekend, I actually had a pretty successful season.  Although the heat came way before I was ready to be done climbing hard,  I’m currently finishing up this post on the back porch of my in-law’s beach house overlooking the ocean, so life isn’t too terrible right now!  Here’s some highlights from the past month or so… 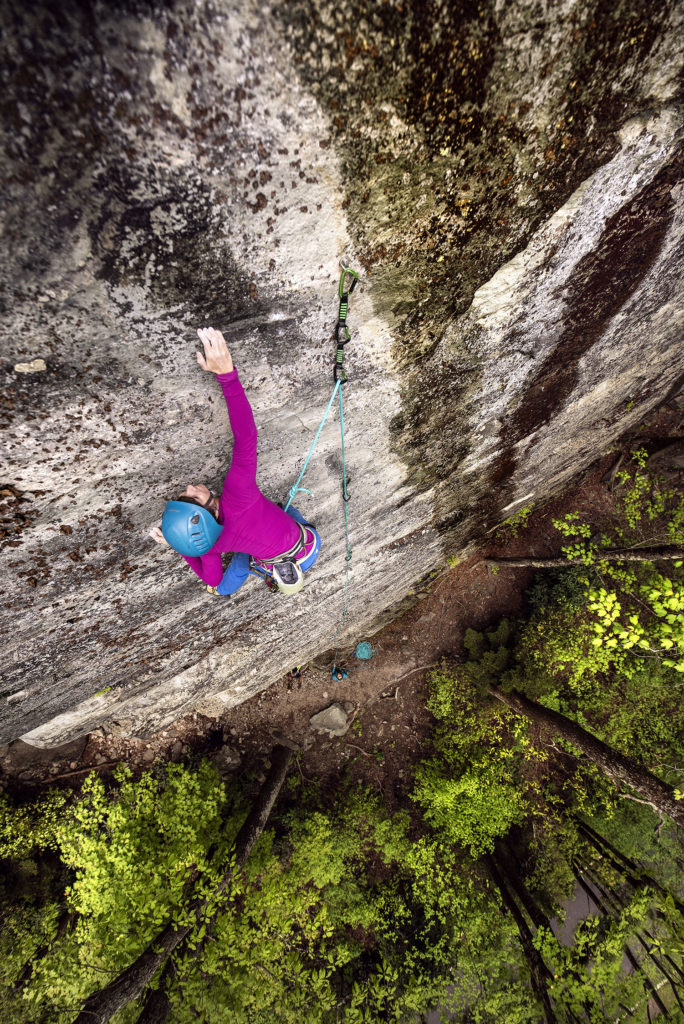 Here Comes the Rain 12b, Photo by Bryan Miller

HERE COMES THE RAIN 12b – Last time I mentioned this I was only 4 same day tries in.  Since this one is a 2hr drive and roadside approach from my house, the kids and I were able to sneak away for a couple of mid-week day trips.  On the first of those, I got in 2 beta burns before the rain ended our day early.  I figured out some alternate beta for the finish, but couldn’t decide which option was easiest/better, and I still hadn’t managed to actually clip the last bolt without grabbing a draw.  Then the next week we had a beautifully cool spring morning…but I hiked in only to discover that there was a waterfall running perilously close to my line.  The good news is that the rock that was dry felt amazingly crisp.  The bad news was that avoiding the handful of wet holds made a couple of sections a bit harder.  More good news was that the waterfall answered my “which finishing beta” question for me , and that a double draw on the last bolt enabled me to find a fairly okay clipping stance using a soaking wet but surprisingly secure toe hook.

Ironically though, all of my clipping rehearsal was for naught, because when I got up there on the sending go, I couldn’t get into that position again.  I tried to clip, dropped the rope, and decided to keep climbing.  A couple of moves later I tried again, again no dice, and I barely saved my body from a big barn door.   I only had 3 more hard moves left and I was about 80% sure I could do them, but the more I hung out trying to clip this bolt, the faster that percentage was being depleted.  If this route was anything but a slab, I probably would have skipped the bolt in question and been at the top by now.  I decided to smear my feet up a little higher, and if I still couldn’t get it clipped I was gonna keep going. I held my breath as I tiptoed up.  The unclipped bolt was now at my knees, but the undercling I was on felt better with the higher feet, and I managed to get the rope in.  A few moves later I was at the top – a little more epic than anticipated, but hey it’s done!

GREEN ENVY 12c – This milestone deserved it’s own post, so rather than rehash all of it, you can just go here if you missed the play by play! 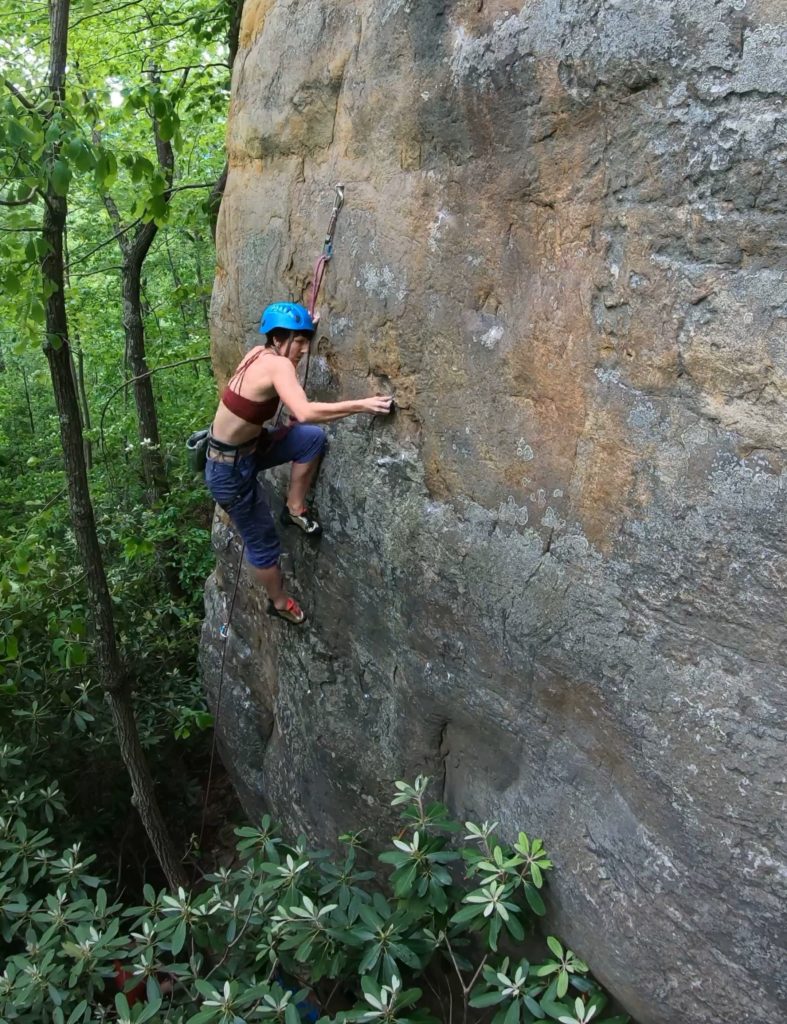 KID FREE WEEKEND – Believe it or not, prior to earlier this month, CragDaddy and I hadn’t had a kid-free weekend at the New River Gorge since 2009 – before we had any kids to bring!!!!!  True to form, our master plans of efficient and flawless crag-hopping didn’t exactly pan out.  Temps were in the high 80’s with jungle level humidity, and the 2 inches of rain in the previous 18 hours made for some of the wettest conditions I’d ever seen.  But all that aside, we managed to have a fabulous time – AND we found a new project for the fall!

BOSNIAN VACATION 12d – I’d be remiss if I failed to admit that I’m SLIGHTLY disappointed that this one is still a project.  On the one hand, I certainly wan’t EXPECTING to send 12d in a weekend, especially a weekend with the forecast we had.  Our intentions were to just have fun project shopping  for fall, not really trying to send anything.  But after doing all the moves on it Day 1, and allowing myself to get sucked back into a second round the next day, it did sting a little to come up half an inch short on the final move of the crux at weekend’s end.  It also stung to graze my back against the wall during the crux fall, but probably not as much as it would have stung to slam into the tree, which was the other option.  That said, I’m hoping that my efforts will painlessly pay off this fall! 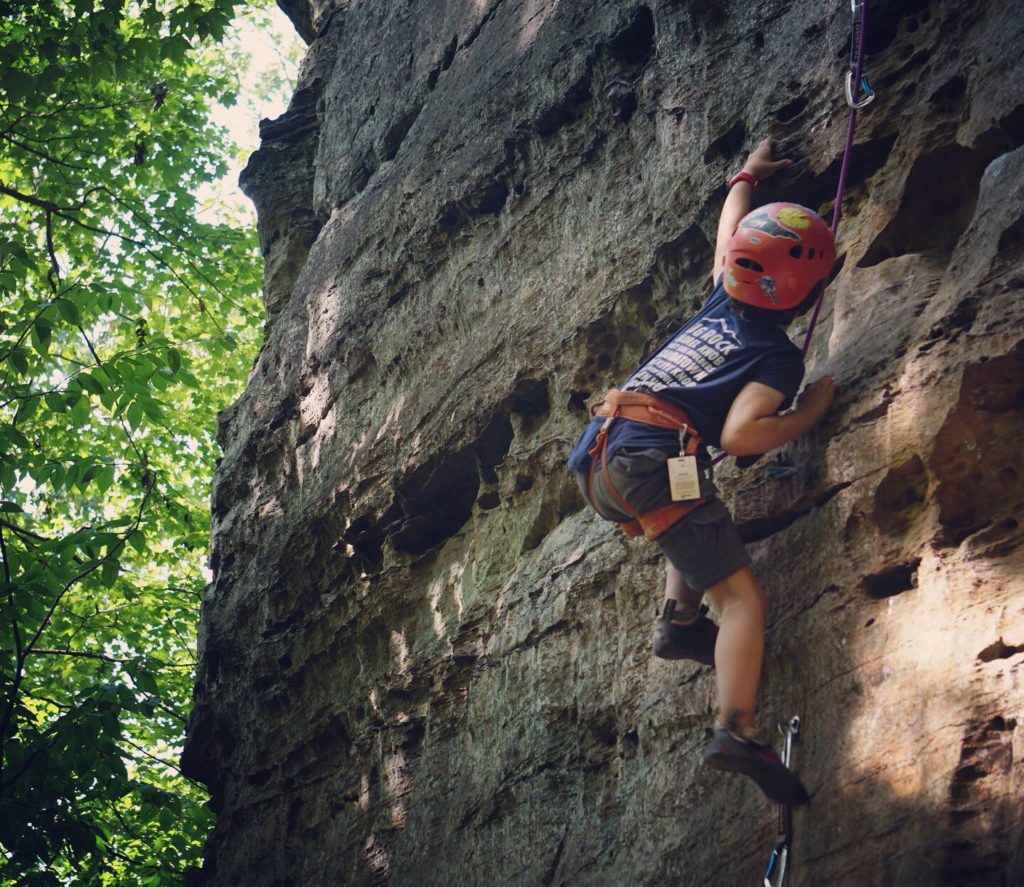 MEMORIAL DAY AT THE RED:  Our spring season “grand finale” was a little anti-climactic.  Conditions were more reminiscent of what we’d expect in late July rather than end of May.  It didn’t stop us from trying hard, but it DID stop my sending streak…unless you count warm-ups, and even those weren’t necessarily a sure thing!  The silver lining of the weekend was that CragDaddy not only put down Hippocrite 12a, but managed to do so before lunch on the last day, which enabled us to get back early enough for me to get a head start packing for our next day’s adventure – 4 days at the aforementioned beach house.

It’s times like these that I’m really thankful to live where we do, having both the mountains and the coast close enough to visit on a whim.  And while I’m certain we’ll get our fair share of climbing adventures in over the summer, my guess is that we’ll probably spend just as much time in the water as we do on the rock.  Tis the season for pools, kayaks, and trompin’ in the creek! 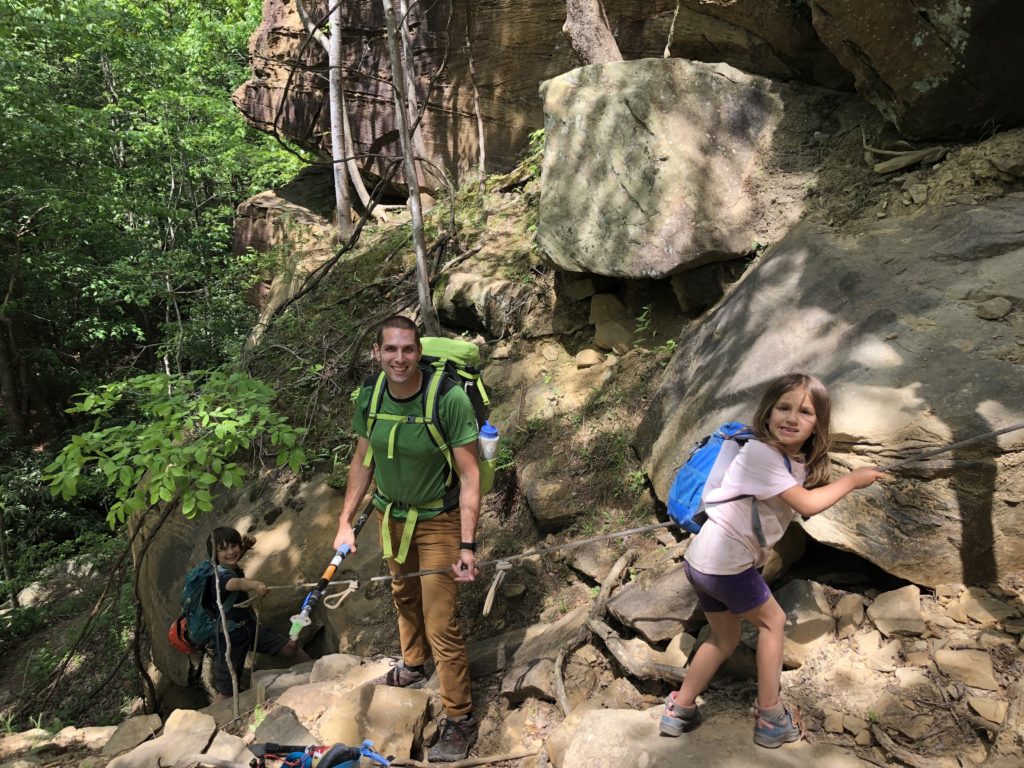 My favorite partners in climb