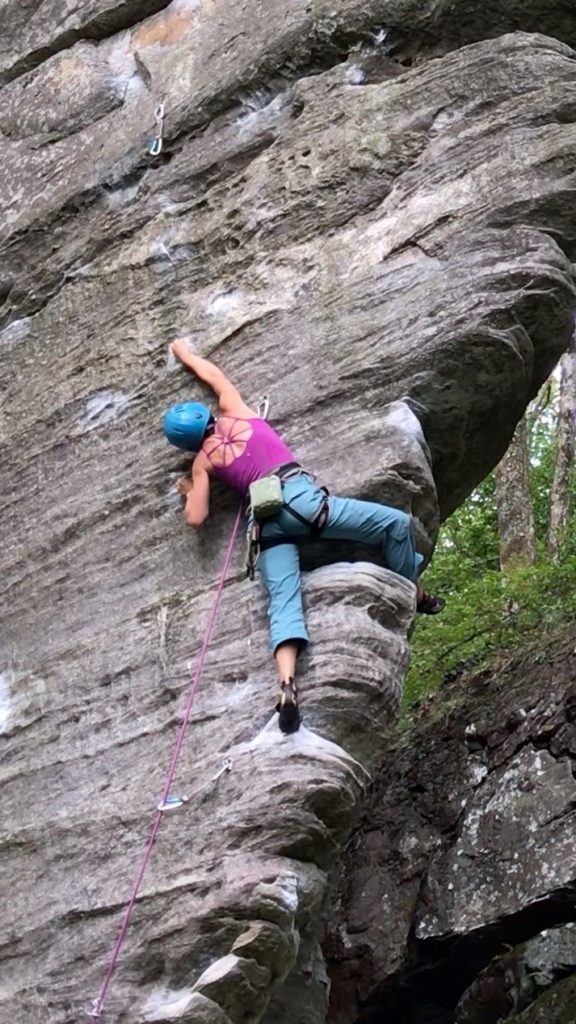 Crux beta on Captain Fuk 12a

I’m not sure what the climbing conditions are like where you are, but around here it is still pretty hot and sweaty.  That was probably the biggest factor influencing our decision to head to Hidden Valley this past weekend.  Other factors included avoiding the throngs of people flocking to the Red and the New for the holiday weekend, as well as wanting to do some recon for the Hidden Valley Travel Beta series posts I’ve been doing.

The good news is that we had success on all fronts – decent temps, crowd avoidance, and recon.  (Oh, and speaking of that, I’ve got some updates – the Right Side has now been added to this post, and 2 new climbs from the Ginseng Wall have been added to the 5.10 and under post.)  The bad news is….you know, I actually don’t think there was any bad news.  It was probably one of the most successful early season climbing trips we’ve ever had!

Our first day was spent on the road less traveled by, aka The Right Side.  A friend of ours had recommended the Ship Rock area to us, specifically Captain Fuk 12a, a super funky looking arete.  But what initially caught our eyes’ was the clean, crimpy face of Black Beard 12b.  Despite the difference in grade, it looked more our style and seemed like a better choice for a first-time-back-outside-after-6-weeks-of-plastic-training.

BLACK BEARD 12b – Since it always takes me a minute to remember how to rock climb again after longer stints of not getting outside much, I opted for the TR.  It was easy to set up by traversing the top of our warm-up, STEDE BONNET FLAG 10b.  My first go I hung at a few spots to keep the flash pump at bay, before stalling out on a big move at the start of the crux on the upper headwall.  It took a lot of finagling to find some beta that felt like it would be doable on point, but finally I was able to piece it together and link the crux several times in a row.  Next go went smoothly and I sent!  Thrilled with how quickly that one went down, I spent the rest of the afternoon belaying my beloved, taking a no-pressure TR lap on Captain Fuk, and putting up ARRRRETE 5.8 for Big C.  He was over the moon to TR flash it after a 30 minute battle, most of which was spent at one committing move out onto the arete. 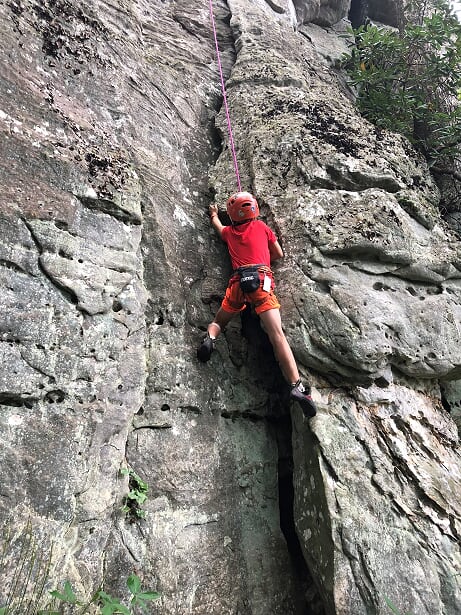 Our 2nd day was spent back over in the familiar territory of the Left Side, and while it was pretty crowded, there was plenty of rock to go around.  Since it had been exactly 10 weeks since we’d climbed both days on a weekend, and we still had a third day coming up, we made it a casual mileage day at areas we’d not done much at prior – Ginseng Wall and Indian Shelter.  Every route we touched was great!

Highlights from Ginseng Wall –
G-SPOT 5.9+ – This route was super fun to climb, but my favorite part was watching Big C put on his try hard pants and fight for the TR send of this one.  His first try he made it all the way to the last hard sequence before eventually pumping out after numerous back and forths to the ledge rest.  He was initially frustrated, but quickly got over it and announced he wanted to try it again…right after we pulled the rope. CragDaddy went up and ticked a couple more holds for him, then belayed him from above as Big C climbed again, claiming his hardest TR send to date!

LOVE JUICE 10c – Fabulous warm-up.  Super fun movement up some flakes on the face, then an easier than it looks roof pull (see if you can go hands-free in the middle of it!)

Highlights from Indian Shelter –
PALE FACE 11b – Ladies! (And shorter dudes…)  Don’t let the book’s warning about height keep you off of this route.  If you know how to work your feet up, the one-move-wonder crux is probably only slightly harder than it is for the giants among us.  Plus the upper face/arete is loads of fun.

NATIVE 11c – This line is full value!  The entry fee is a powerful boulder problem right off the ground to a ledge, followed by an easy runout to the base of the headwall.  From there to the top is pretty sustained movement, with the potential for a heartbreak finish if you don’t find the right holds fast enough! 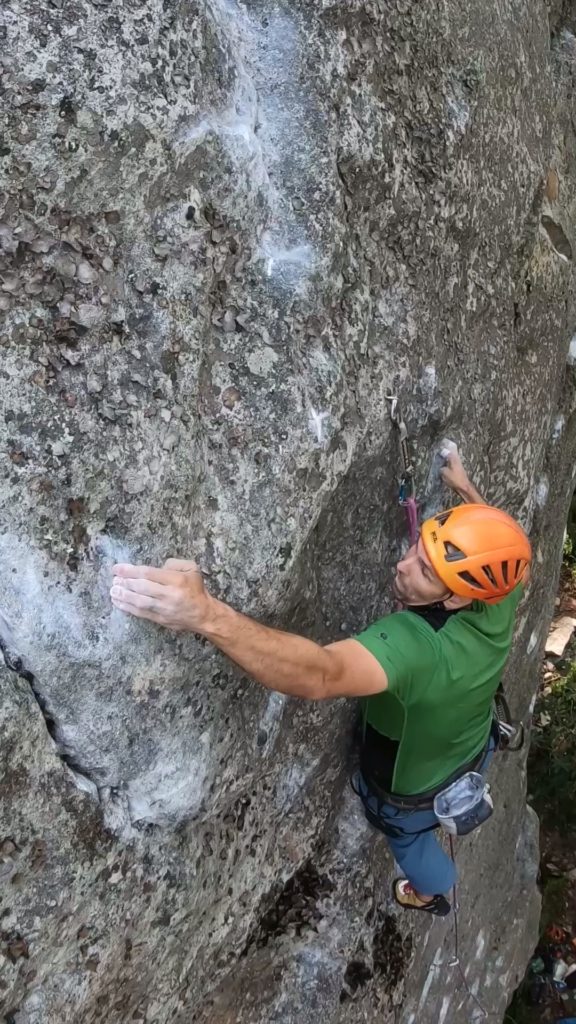 Steve mid-crux on Blackbeard 12b

After an evening of paddleboarding and campfiring, our last day was spent back on the Right Side, as CragDaddy was seeking revenge on Black Beard.  I warmed up on GUNNELS 10c this time – great movement on almost tufa-like features on the back side of Ship Rock.  These bolts need replacing, and some of the rock was a little suspect, but I think this one has potential to be a pumpy classic once it gets cleaned up a little.

Next up, CAPTAIN FUK 12a.  It was definitely the coolest and most unique looking route on the entire Right Side, and I was glad to get another crack at it.  The first half of the route seemed to feature all that I am bad at – thuggy tossing up an overhanging arete.  The upper half of the route was fun techy face climbing, but the transition from arete to face was pretty darn hard, and involved a pretty painful (but effective) leg scum that left its mark on my lower leg.

I was pleasantly surprised at how much better I did on this one second time around, linking everything except the crux, and decided it was worth sticking with for the day.  Next go was a valiant effort, but I came up short making the long toss at the end of the crux.  Meanwhile, CragDaddy got sendy on Black Beard, and also put up another route for Big C – BIG MAST 10b.

After a nice long rest I still felt very third-day-on-ish, but I figured I would give it hell one more time and see what would happen.  At first it seemed like everything went wrong – I botched my beta multiple times thuggin’ up the arete, and had trouble setting the heel just how I wanted it to move over on the face.  When I finally got settled on the crux crimps, my core was so shot that I couldn’t lean out enough to see the high foot I needed for the last toss.  I was starting to redline, so the minute my skating feet touched something that felt solid I launched…and made the move, much to everyone’s surprise!    The rest of the route was not a sure thing by any means, but I was able to manage my rests well, and finished up without any more complications.

Overall, we really couldn’t have asked for a better start to our fall climbing season!  One of the most exciting parts for CragDaddy and I was seeing how psyched Big C was!  He’s been climbing hard in the gym all summer, but that usually doesn’t translate very well for him outside.  (His m.o has always been to climb once, maybe twice over the course of a weekend, then spend the rest of the time just being a kid in the woods.)  This weekend he strung together more pitches than he ever has before, and was literally begging to climb more!  If this new try hard mantra keeps up, it looks like we’ll be alternating some kid climbing days with some grown-up project days this fall – or at the very least, hiking in another rope so we can leave him a TR up all day.  No complaints here!

How bout you all – tell me about your Labor Day adventures!!!