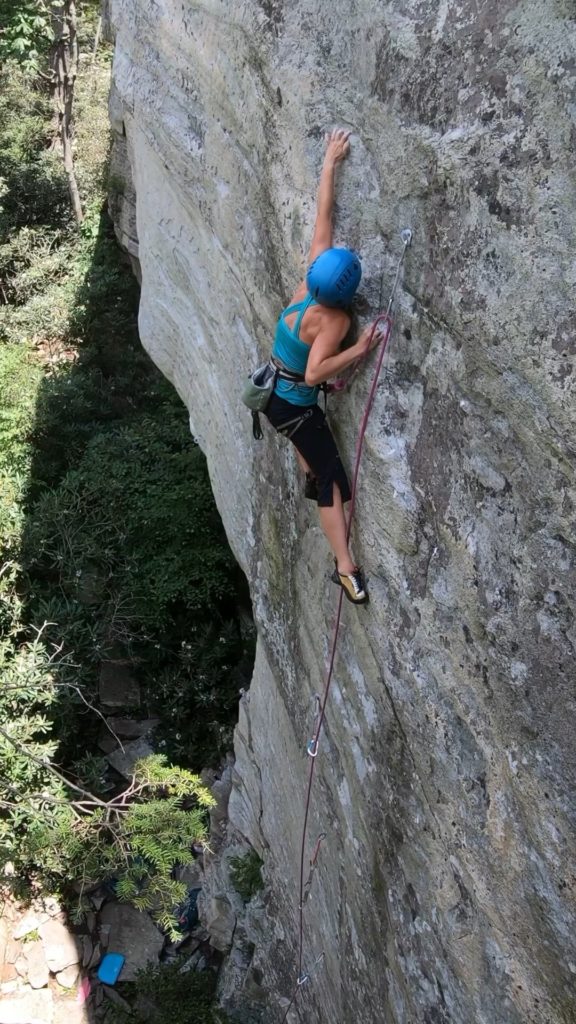 “Mommy, what’s ‘bolt to bolting’ mean?” my 9 year old son asked me.  I hadn’t realized he had been listening to my conversation.  I was lounging at the base of the cliff, trying to summon the energy to give my project one last go before hiking out.  I was exhausted.  It had been a roller coaster of a day, hiking in to find ourselves in the midst of a foggy, misty drizzle that had made our slab warm-up a lot more exciting than we’d wanted.  Surprisingly enough, however, conditions on the 12 wall were primo.  The routes were steep enough to be out of the drizzle, and the warm rock kept the condensation at bay, leaving crisp, dry rock.  At this particular moment, I’d just finished falling off the very last hard move for the 2nd time that day.  A few weeks ago, I’d fallen off that same spot 3 times in one day, and I was pretty certain the final battle of the day would end the same way.  So certain, in fact, that while CragDaddy was cleaning the route next door, I seriously considered asking him to take down my draws as well on his way down.

That’s where the “bolt to bolt” conversation started.  See, I’d figured out some different beta at the end of my last go.  The difference was subtle, involving angling my lower body into somewhat of a drop-knee position rather than turned out and toe’d in.  I’d tried similar beta my very first day on the route, back in June, but it hadn’t worked.  But on this day, conditions were a lot better, and I was able to get much more locked in on the left hand crimper I was using to make the toss to the hold I kept coming up short on.  So on a whim, I’d tried it again at the end of this previous attempt, desperately grasping to find something, ANYTHING, that would make this stopper move higher percentage for me.  It made the move feel maybe 10% easier.  Not only did it extend my reach, but CragDaddy and I hypothesized that it kept me tighter to the wall without having to rely solely on my core to keep me in.

I had lowered with intent to try it one more time, but as I said now that I was down, lounging on the rock, with CragDaddy within easy reach of my anchors, I was having second thoughts.  I felt good about the new beta, but also felt like it was probably too little too late.  Despite the fact that I had the rest of the route totally dialed, the moves were still super hard both on the body as well as the skin, and just the thought of doing it all again was exhausted, even after laying around at the base of the cliff for the past hour.  Temps were dropping, and that cloud forest vibe was starting to get old (and cold!) 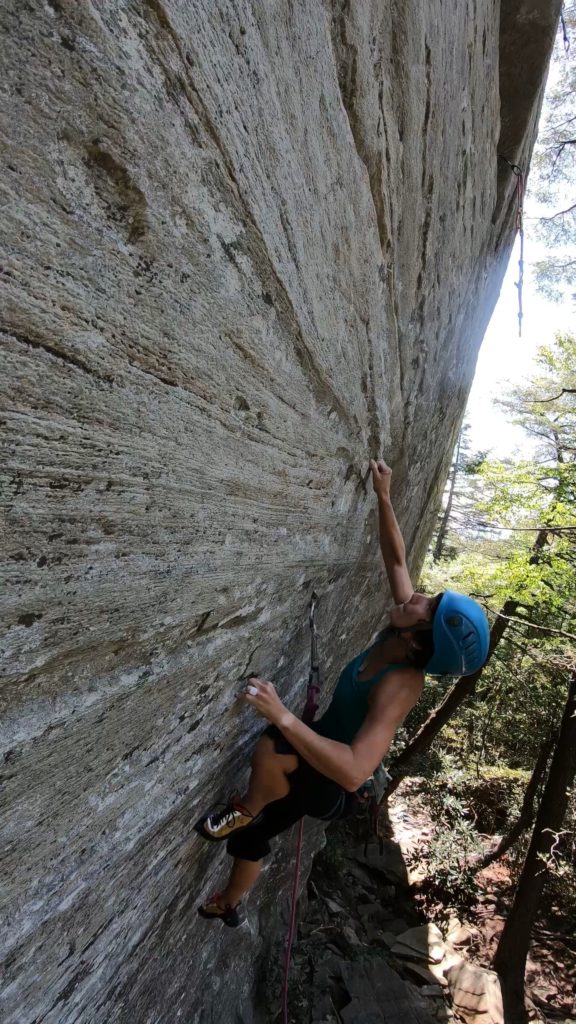 Opening moves…your skin will thank you for moving quickly here.

CragDaddy reasoned that we were all the way down there (it’s a brutal hike, especially with the kids), the draws were in, and we had plenty of time.  He was right; I owed it to myself to try it one more time.  Even knowing it most likely would NOT end with a send, practicing the new beta would be extremely helpful to have in my muscle memory bank for our next trip out.   My mind knew this, but my body was rebelling.  I compromised by suggesting that I just go bolt to bolt – no need to get mentally and physically “up” again, but my body would get the aforementioned training benefits.

When I explained this in response to my son’s question, he just nodded and went back to reading his book.  But my answer must have been weighing on him, b/c several minutes later he spoke up again.  “Mommy, I don’t want you to bolt to bolt.  I want you to try and send it.”  Thinking this could be a good parenting opportunity to reinforce the “progress, not perfection” mantra to my highly perfectionistic son, I reiterated how satisfied I was with the baby steps I’d made towards my goal by finding the new beta, and working out some better rest stances earlier that same day.  I told him that despite the lack of a send, I could still call the day a success.

He wasn’t buying it.  “But you have new beta.  If you try really hard with the new beta you can send it.  I know you can.”   He looked so sincere.  And he made a good point – all those nuggets of wisdom I’d just told him would still be absolutely true if I tried again and failed.  I had nothing to lose, right?

So, inspired by my son’s faith in me, I tied in again and tried to ignore my tired shoulders and nearly shredded fingertips.  The opening sequence went fast, I’ve done it so many times I could probably do it blindfolded at this point.  I settled myself at the rest, then launched into the first crux, aka the Tall Person Crux.  This sequence I also had dialed, and had executed it perfectly all day…but this time I rushed a hand placement and wound up out of sequence so I quickly downclimbed back to the rest.  Resettle.  Go again, this time according to plan.  I clipped the next bolt, took a couple of precarious shakes and launched into the Short Person Crux.  My nemesis move was at the end of this sequence, a non-move for literally every one else I’d ever seen on the route.  The static reach off jug feet to a great edge for them is a precarious, off-balance deadpoint off bad feet for me.  But I couldn’t focus on that.  Getting to that massive edge was the only thing keeping me from the victory run to the chains. 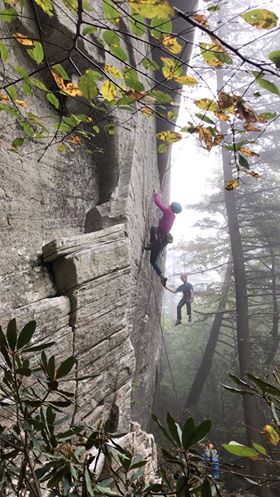 First (unsuccessful) send attempt of the day this past weekend. Alex Blum making the cameo appearance in the mist. 😉

I executed the same crux beta I’d done so many times before.  Got my left foot up, and kicked my right foot out to the tiny divot I’d been edging on before, but this time, turned my hips and dropped the knee, trying to keep as much body tension as I could.  I threw the hail mary, and latched the hold!  I couldn’t believe I was still on the wall!  After a rather ungraceful match of my hands, I took off to the top, hollering down for CragDaddy to stay with me because that 4th burn exhaustion was keeping the moderate finish from feeling as easy as it usually did.  The finish hold had gotten progressively wetter throughout the day, but thankfully it was so big it didn’t matter.  Chains were clipped, and I let out a whoop that probably could have been heard on the other side of the Linville Gorge!

It was a happy, albeit treacherously wet, hike out.  By the time we reached the car, the misty drizzle had turned into a legit rain.  To be honest, I’m still amazed the route had remained even climbable all day, let alone climbable in the best conditions I’d seen on the route thus far!  But good climbing conditions don’t always make for good photo conditions, as all of the best places for photos were pretty wet, not to mention the terrible visibility.  That said, we did manage to get some pretty good footage back in July, and CragDaddy was nice enough to compile a little video for me as a souvenir.  I hesitated to share it, as the perfectionist in me sees how sloppy my earlier attempts were. (my son gets it honest…)  I also wish I’d had the successful crux beta recorded.  But it does capture the essence of this route, which in my opinion, could possibly be the best one on the wall.  Here’s the link to the You Tube video if you’re interested!

If you are from the Southeast and you dig slightly overhanging crimps with some old school NC bolting, you should make a date with Middle Hawksbill this Saturday.  I promise you won’t be disappointed.  Tweakend as well as any of the routes on the 12 wall would make a worthy opponent.  As for me, I’ll be back there at some point to finish out the wall….but right now I’ve only got eyes for the New!!!!